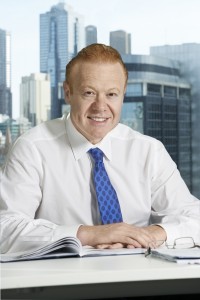 I was delighted to be part of the first Global Food Forum held by The Wall Street Journal. Pratt Industries was excited about our sponsorship, which is a testament to the Journal’s leadership in reporting about food.

But the food production industry is neglected. In fact, Bill Gates said to me (and I agree) that the American food industry doesn’t get the attention it deserves. Yet last year, food manufacturing sales were $850 billion, making food production the biggest nongovernment industry in the United States — bigger than movies, tech, auto, and oil and gas.

So food’s worth focusing on. And that’s why we sponsored this forum. We want to shine a spotlight on America’s food industry to identify how it can grow, invest and generate even more quality jobs for the nation. We propose starting a national conversation, including industry, government and civil society.

One goal is to double our food production sales to $1.8 trillion, creating millions of new American jobs. A challenging goal, but achievable given the huge food export opportunity. And when we increase manufacturing here, we support American jobs.

The big opportunity to grow exports is that Asia has over 2.5 billion people coming into the middle class who want safer, cleaner American food. So Asia is a massive opportunity, with countries like China, Indonesia, Vietnam, Korea and India wanting more high-quality food. If we view these Asian economies as major valued customers for our safe and nutritious food, America can begin to address its $550 billion imbalance in goods traded with Asia.

But we are not alone in seeing this opportunity. In fact, in the past 15 years America’s share of global exports has slipped, with countries like Brazil, New Zealand and several others lifting their food-export game and nipping at our heels.

By comparison, unbelievably, America’s food exports in dollars have begun to decline. Last year, there was actually almost 10% decline in the value of U.S. agriculture exports, compared to 2014 — while Asia’s total food imports continued to rise, especially high-protein food, which the Asian middle class craves. The reasons for this decline are complex, and part of the issue is America’s traditional focus on exporting bulk commodities like soybeans.

I believe America can leverage an important advantage if it pivots towards more high-value agriculture exports like fruit and vegetables and processed exports like meat, dairy and infant formula. That’s because American food standards are the highest in the world. And the over
2.5 billion Asians joining the middle class want safe, clean food produced and packaged in America.

Food processing and packaging also means more factories and therefore more jobs for America. And for small food processors, export is easier and less risky than trying to set up factories overseas. In China alone, the demand for infant milk formula has grown by about 15% annually since 2010 and is currently $27 billion. American milk cows are the most productive globally, so our dairy exports have the potential to take off. The U.S. has less than a 2% share of the global market for infant formula, where safety is critical.

Another big focus for food export must be California — the fruit and vegetable salad bowl of America. It’s also the closest mainland American state to Asia, making shipping cheaper. To help California, we must address the most important food production issues it faces — the ongoing drought and, what many Californian farmers consider an even greater challenge, the labor shortage. I’ve been told that in some areas, up to 20% of crops are left unpicked because of labor shortages, as it’s backbreaking work.

Could technology help? It’s already starting with dramatic advances in robotic harvesting and processing technologies. Technology can also tackle water issues, and is being used in Israel and Australia to help boost water-use efficiency.

Improving freight and logistics efficiency on the West Coast will also improve our competitive edge.

All these ideas are up for discussion, so let’s give this an “all-of-society” focus and create a vision for new, sustainable jobs and investment here, while helping America boost global food security.