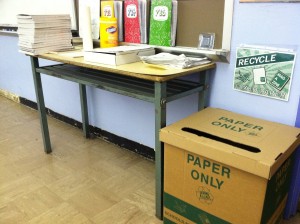 There’s been a lot of concern in recent days about debris from the Japanese tsunami washing up on West Coast shores…but a far greater ocean-based threat according to marine biologists is the environmental disaster known as the Great Pacific Garbage Patch.

This Texas-sized quagmire, most of it discarded plastic, is produced by ocean currents and circles about 1000 miles off the coast of California. It’s the result of years of debris being simply thrown into the oceans. Oceanographers say the problem is already affecting marine and bird life.

Miriam Goldstein, the lead author of a recent study on the Garbage Patch, told the Los Angeles Times: “I’m more concerned about our constant input of trash than I am about these one-time disasters (like the tsunami). We can’t prevent terrible events like the tsunami, but dumping plastic into the ocean is something we can control and don’t do very well.”

Education would seem to be part of the answer to preventing this swirling mass of detritus from getting even larger. Pratt Industries’ recycling and outreach programs are playing a role – however small on a worldwide scale – in spreading the word that the environment HAS to be protected. In fact, one of our most recent programs – to donate paper recycling bins to every public school in New York City – is aimed at educating more than 1 million students about the importance of the environment and how individuals can make a difference.

Pratt has donated 40,000 of the 100% recycled corrugated bins to date – one for every classroom in the public schools in Manhattan, Brooklyn and Staten Island – and is looking to complete the city-wide program with another 25,000 containers for the Bronx and Queens later this year.

The program will eventually stretch to 1700 public schools and reach more than 1.1 million students.

“We’re proud to sponsor and support this recycling initiative with the school system and our friends at the Department of Sanitation, GrowNYC and the Department of Education,” said Hank Levin,  Contract Manager at the Pratt paper mill on Staten Island.

Since the program’s inception last September, students have already recycled enough paper to save the equivalent of more than 35 trees a week. Now, the Pratt program will be featured in an upcoming 10 to 15-minute film about how to implement school recycling – and will be distributed to every school in the NYC system this fall.

“This innovative recycling program is a wonderful way to introduce to our students the importance of reducing the waste they produce,” said John Doherty, Commissioner of the Dept of Sanitation. “The more exposure young people have to keeping their environment clean and green the more sustainable our city will become. I applaud Pratt and our other partners in creating this exceptional initiative.”

John Shea, the CEO of the Division of School Facilities with the Dept of Education, said the program would help his environmental officers spread their message. “All our schools have Sustainability Coordinators who help to implement recycling programs,” he said. “The bins, which look great and are free of charge, will go a long way to supplement these programs. I want to thank Pratt Industries and GrowNYC for their support in these efforts.”